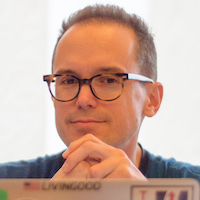 Jason Livingood serves as Vice President of Technology Policy & Standards at Comcast. As part of this role, he coordinates Comcast’s efforts to do things including (1) develop open standards such as at the IETF, (2) spur R&D such as via leading the Comcast Innovation Fund and engaging with universities around the world to conduct research of interest to Comcast, (3) apply research and standards to initiate new network and services’ concepts and (4) engage with governments, regulators and other external key stakeholders.

Jason joined Comcast in 1996 to help the company launch high-speed Internet services and has also been instrumental in the creation and launch of Comcast’s business class Internet services, Xfinity Voice, Xfinity Home, and Xfinity WiFi. He has held a wide range of roles in the company, including in architecture, engineering, operations, software development, DevOps, and product management.

Jason serves on the board of the IETF Administration LLC. He also has several patents and RFCs and currently serves on the Broadband Internet Technical Advisory Group (BITAG) and in other industry technical working groups. He has also served on the Board of Trustees of the Internet Society, ICANN’s Security & Stability Advisory Committee, the FCC’s Communications Security, Reliability, and Interoperability Committee, and other industry groups. He holds a M.B.A., concentrating in Technology Management, as well as a B.S. from Drexel University.